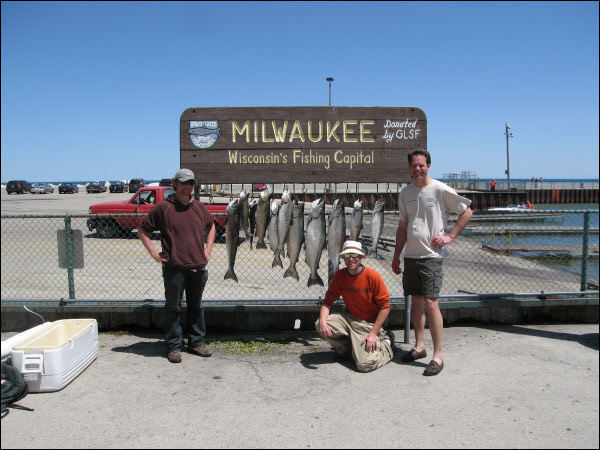 Brian and Ty booked a Milwaukee Salmon Charter on Lake Michigan for late May. We had been taken limit catches of Coho Salmon, with an occasional Chinook Salmon for the earlier part of May. On this morning we were faced with a 20-30mph Southwest winds and decided to try fishing the harbor instead of facing the big waves on the lake.

This really paid off and we took 12 nice Salmon and Trout aboard Silver King Charters. The gaps hold huge amounts of bait fish in late May and early June. The water temp is also perfect for Salmon. Through in the structure of the break wall and you are set up for some dynamic fishing.

Charter Fishing Milwaukee Wisconsin during this time gives us a lot of option on where to fish and if we have an extremely rough day like this one we can fish the harbor instead of rescheduling the trip. The fish in the harbor are usually larger than the ones out in the lake.

During this trip spoons off downriggers were hot and took 7 fish. The dipsy rods also kicked in for 5 more fish. These also had spoons on them and were some of the bigger fish. Three of the fish off the dipsies were a 19.5 lb Chinook Salmon and two 15 lb Chinook Salmon.

Brian landed the 19.5 lb Salmon after the fish took over 600 feet of line out. He lost another Salmon which did the same and popped off right at the end of the fight. Very frustrating. But Brain and Ty made up for it with over 130 lbs of fish caught that morning.

Milwaukee Charter Fishing is always about putting you on the fish that are bitting and in early late May and early June just outside or inside the harbor can be that place. So give Silver King Charters a call and experience the outstanding Charter Fishing in Milwaukee Wisconsin this year and you will get hooked on Salmon fishing.