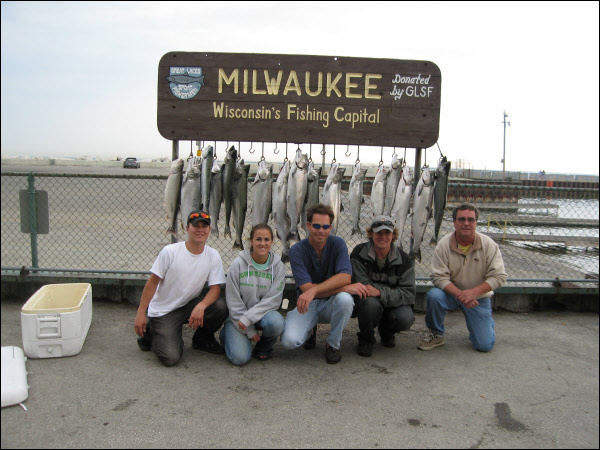 Fulton's back to Milwaukee Charter Fishing for the Chinook's

Fulton is from Green Bay, Wisconsin and came down earlier in the year to experiece Charter Fishing Milwaukee Salmon and Trout on Lake Michigan. We took a limit of Coho's and he was impressed. I told him to book a charter later in the year for Chinook Salmon and he would become addicted. One month later in late June he was back with his sister and father.

We motored up north for the Milwaukee Charter Fishing trip and set up in 100 feet of water. My first mate Chris started dropping the downriggers and I set up the dipsy rods. We had four lines set and a dipsy, then a downrigger release with fish. Vanessa took the first fish. She was a little green but her learning curve went up fast. Fulton grab the other and fought his like a pro. Good thing he had practice with the Coho's in May. They land both fish while Chris and I set 6 more lines. Both were nice 8 lb. Chinook Salmon.

The downrigger set at 90 feet went off next and it was a screamer. There was no doubt this was a big Chinook. The questions was how large. The line conter read 310 feet when the fish finally stopped running. This is over a football field in length. Fulton's dad let the kids bring in the small ones and saved this monster for himself. It took 20 minutes but it was worth the battle and he ended up with an 18 pound Chinook Salmon.

Vanessa was able to land another 8 lb King off a dipsy while her father was fighting the big fish. This is what Charter Fishing Milwaukee Salmon is all about during the summer. We had consistent action and ended up with a nice limit of Chinook Salmon on a beautiful summer charter fishing trip on Lake Michigan. The only problem was I may have lost a customer. Fulton and his Dad bought a boat in July and are now fishing out of Algoma on there own. I told him he would become addicted.